Getting It Just About Right 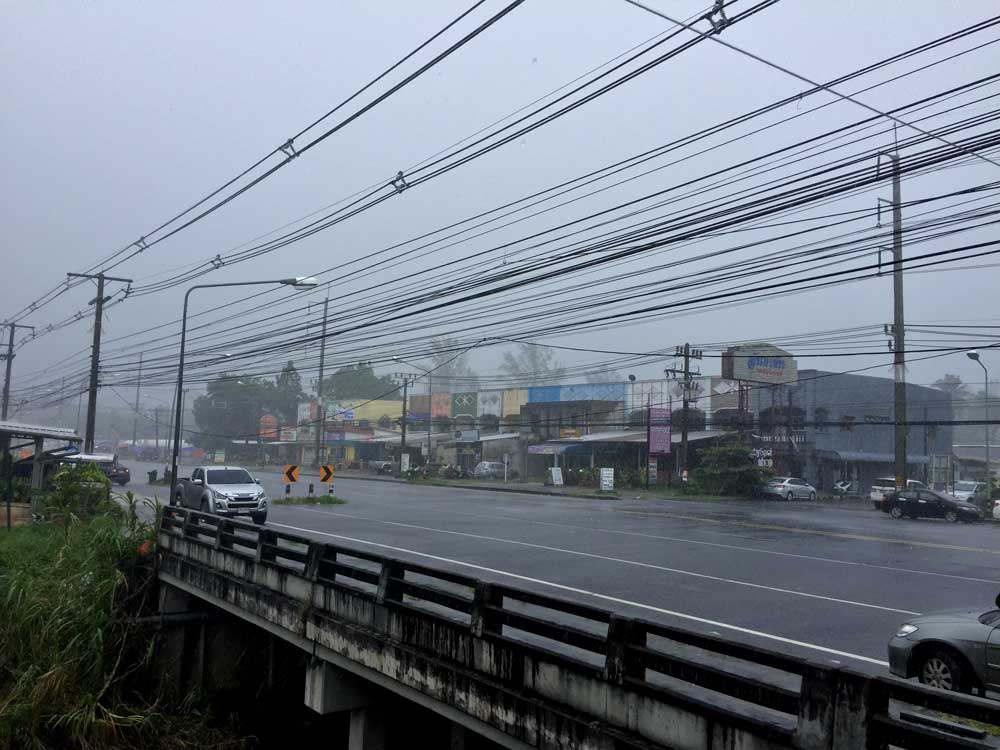 Posted at 23:29h in Weather by Auric 0 Comments
0 Likes
Share

It rained during the night but by 8:00am the skies were brightening nicely. The temperature was warm but not too humid after a cooler night, helped by a light breeze. After a lovely morning it gradually became more cloudy over lunch time. By 3:00pm darker clouds were rolling in and the wind started to pick up. Approaching 6:00pm the skies were bright again. Saturday night and a chance to head to Bang Niang market without getting rained on, a rare opportunity in Khao Lak’s low season.Rain showers started later in the evening.

Sunday morning and the ground was wet from the rain the night before. Though the rain has stopped in the early hours but there were still plenty of rain clouds to the north. Looking south the sky was brighter and more blue. It remained dry but by 11:00am there were lots of low, dark clouds covering Khao Lak. Rain looked imminent. And a few minutes later…. rain, though not for long. Up to 3:00pm it was still overcast with sporadic, drizzly showers. It rained on and off until around 9:00pm followed by a dry spell.

A new week started and it was a grey morning with a slight breeze, the cloud cover high in the sky. We forecasted a more rainy middle of the week for the 3rd week in June, let’s see how it pans out. It was a breezy, overcast day up to 3:00pm. The was the odd splatter of rain but all in all it was a fairly dry day. 4:00pm in the afternoon and still dry, which was also the case in the evening.

It had rained at some point during the night. The morning was breezy with dark clouds hugging the hills to the East. It felt like it would rain more but around 7:00am the weather brightened up a little. But the wind was also picking up too. It was overcast but dry all morning. It rained at 1:00pm, quite heavy with large drops of water. 15 minutes later it stopped but a lot of dark ominous clouds remained. 15 minutes later and it really started to rain, heavy with strong gusts of wind which blew the rain leaving few places to shelter. It eased into a steady drizzle after about 20 minutes, followed by on and off showers through the afternoon. Around 6:45pm heavy rain fell again. The rain eased by 7:30pm and it was a fairly dry evening after that. 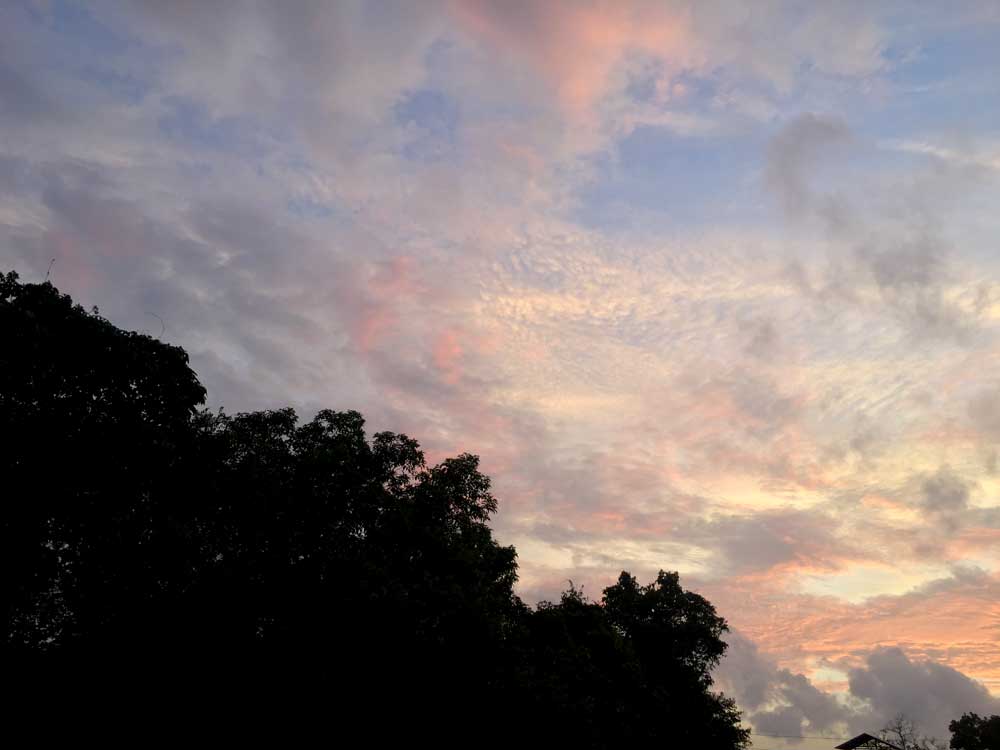 It was a much brighter morning compared with the previous days.  Our forecast was for rain in the mid week. Today’s more up to date Khao Lak weather forecast was mostly cloudy with a 40% chance of rain. 7:00am and it had it was 27˚ already. The morning remained mild, overcast but dry and cool. After lunch the skies brightened up a bit. By 2:00pm it was brighter still and at 3:00pm Khao Lak was experiencing blue skies and sunshine. This nice weather continued into the evening till late. 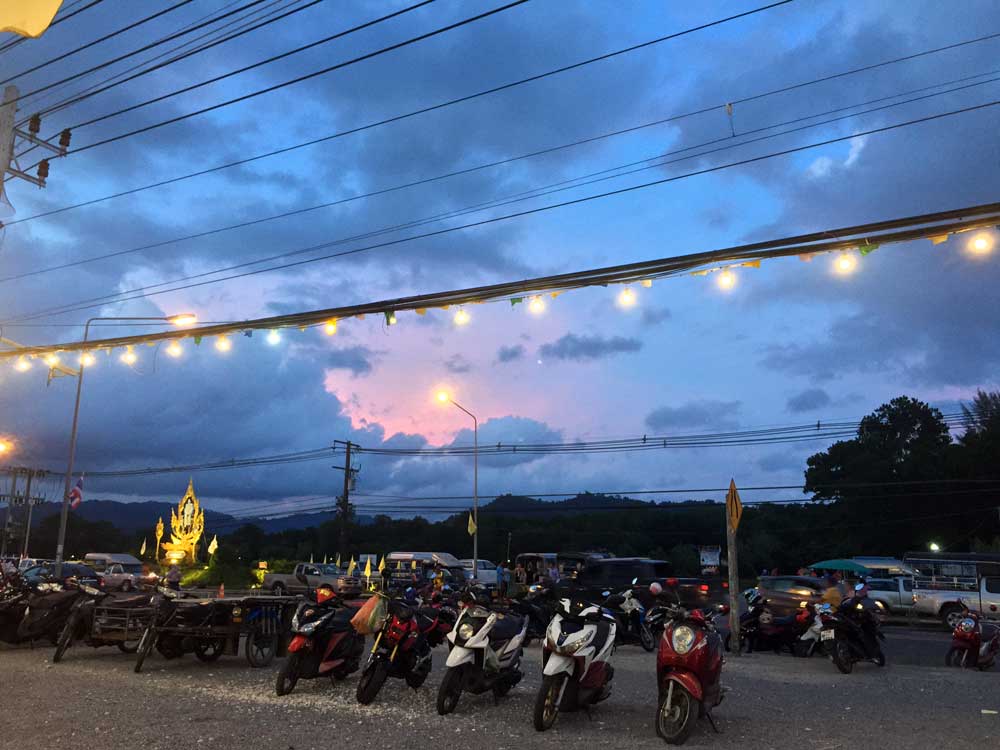 Another bright morning, cool with blue skies and some high white clouds. By 7:30am some darker clouds were hugging the hills to the South of Khao Lak. It was a warm and sunny morning. Lunch time it was hot. A lovely day continued into a lovely evening but it eventually poured down at 11:30pm. The rain didn’t last long though quite some water fell.

Khao Lak’s morning was damp after more rain in the night, but it felt quite fresh. There were clearer, blue skies out over the Andaman Sea, darker lower clouds to the north and over the inland hills. Morning through to lunch timeit was bright but with plenty of dark clouds. A slight breeze kept the temperature feeling cooler. It was a nice balmy evening. Some dark clouds hung around the sky but it stayed dry. Into the evening and the rain held off.

We had predicted a more wet mid week in Khao Lak. The weather was like this for the first few days, followed by some much nicer days. It looks like it might be (another) wet Saturday, especially in the late afternoon and evening. Sunday looks like it could rain at any point during the day. Next week and it’s a bit 50-50 how it will go. Right now it looks likely to rain Wednesday morning and then more, heavier rain on Thursday.