Khao Lak 813 aims to be the ultimate Tourist information guide to Khao Lak. It is completely free to use and was started to celebrate everything wonderful about Khao Lak. You may already have heard about about the endless stretches of pristine beaches running along the west coast of Thailand. These beaches are undoubtedly impressive, but there is so much more to our little town.

Khao Lak 813’s aim is to bring you information about all the events, festivals, special offers, news and just about anything that we think is cool in Khao Lak. Our events calendar is a community based service and completely free for anyone to use. So, I hear you ask, why the name ‘Khao Lak 813’? To answer that, we will need to briefly go back to the most tragic part of Khao Lak’s history.

With all the wealth of great things to do and see around Khao Lak, we realised there was no one place to find all this information. At first appearance, Khao Lak can seem like a quite little town with not much going on. This couldn’t be further from the truth.

The Khao Lak 813 events calendar is an attempt to show people all the cool stuff happening. We are happy to promote any special events, from any company, charity or community.  Our service will be for free, forever.

We hope you can enjoy our beautiful town as much as we do. Beaches are Forever

Memories of the 2004 Tsunami are never far away. Anyone here at the time will forever have it etched in their minds and anyone that visits always wants to know more about it.

There are thousands of articles about the details of this tragic event, so we do not need to go into detail here.

Instead, we feel it is better to focus on the future and all the positive things that have happened since then.

Khao Lak has grown into a vibrant and colourful town with much to be proud of. We feel that the Khao Lak 813 police boat is the perfect symbol of the transition from tragedy to success. 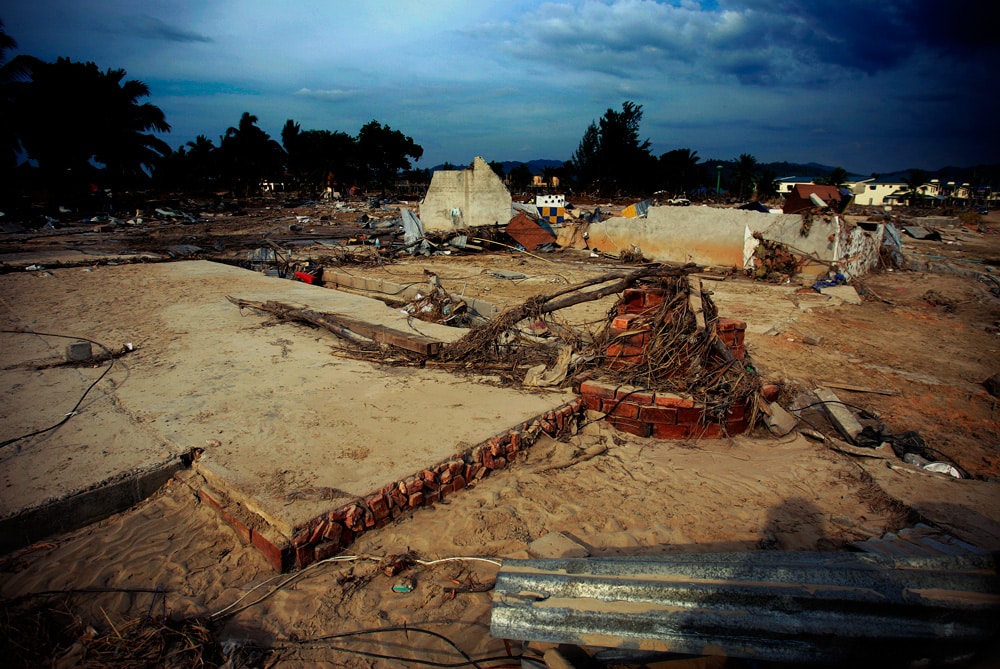 Bang Niang, Khao Lak in the wake of the 2004 Tsunami

Khao Lak 813 takes its name from an 80ft patrol boat built in 1994. Its original purpose was to protect and serve VIPs (namely the Thai Royal Family on their holidays), investigate crimes, keep areas secure and rescue boats in distress.

On 26th December 2004 the 813 police boat was moored up about 1 nautical mile from the coast in front of La Flora resort.

The unimaginable strength of the giant wave carried the 813 police boat all the way to shore and then a further 2km inland. The boat is still sitting in almost the exact same place as it was over ten years ago. It still remains a sombre reminder of Khao Lak’s history. However, it is a sign of how far the town has come since then.

The 813 Police Boat’s final resting place, roughly where it was washed ashore in 2004

The town of Bang Niang, just north of Khao Lak centre, has built up around the Khao Lak 813 police boat. It has become something of an icon and is now a tourist attraction in itself. Where it was once just surrounded by fields, it is now the centrepiece in a large area designated for festivals, shows and events.

Loy Krathong festival (full moon at the end of November) is the best time to visit the Khao Lak 813 police boat. At this time the boat is brightly lit and will be visited by thousands of people. Loy Krathong is maybe the most picturesque festival in Thailand. You can light a candle and float it down the river to wash away all your sins.

The flickering lights on the water represent turning over a new leaf and starting anew. This is made all the more poignant with the Khao Lak 813 boat as a magnificent backdrop. Loy Krathong is about letting go of the past and it is a beautiful & humble occasion. There is no better place to celebrate than the 813 boat. Khao Lak will never forget the Tsunami, but as the 813 boat wonderfully illustrates, we can move on.